I thought I would make a thread dedicated to the Orangeville-Brampton Railway and the Credit Valley Explorer train service. With a chunk of the line running through the GTA, the OBRY as a rail corridor could become more and more important in the future.
T

kinda weird (in a twilight zone kinda way) that you would create this thread today:

1 dead, another airlifted to hospital after car and freight train collide in Brampton
http://globalnews.ca/news/2626745/t...in-collide-in-brampton-peel-ems/?sf23989812=1 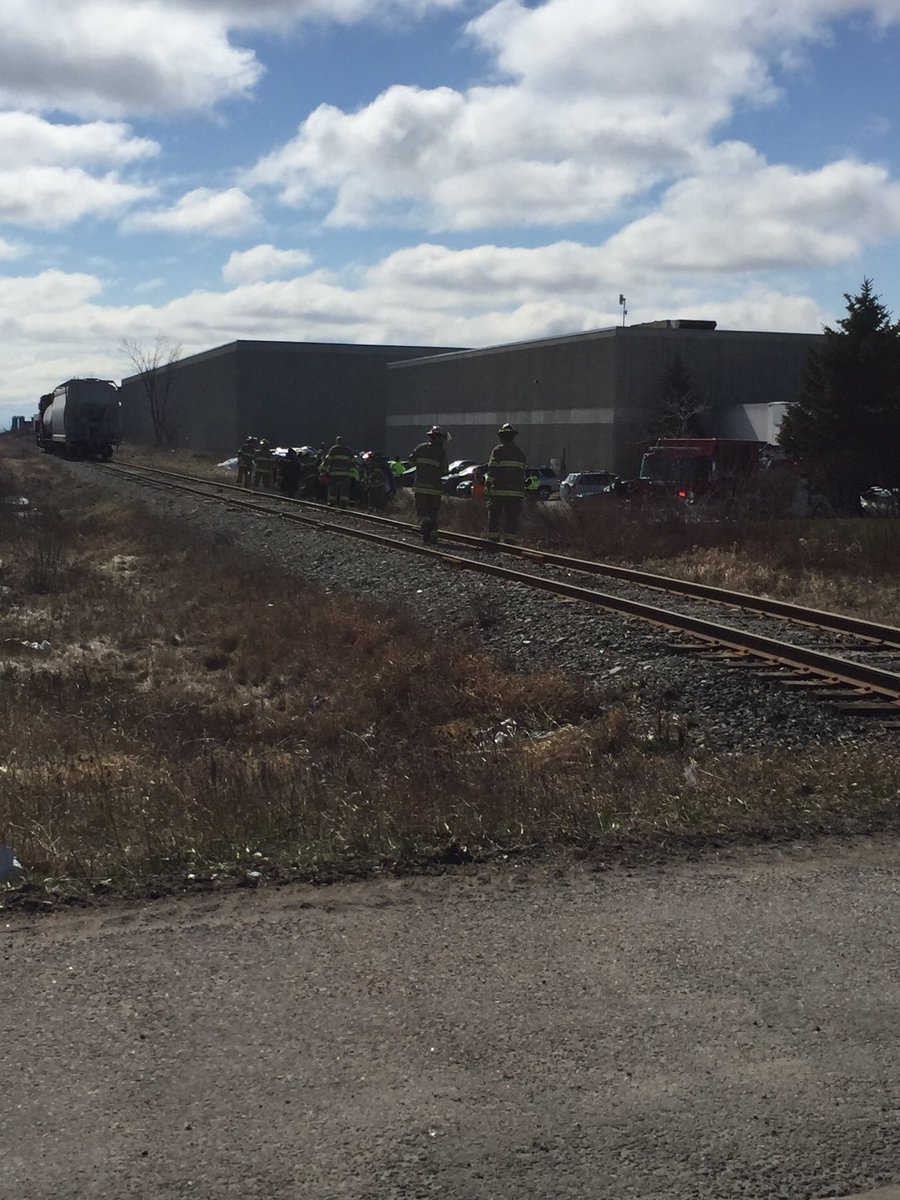 Surprises me that the crash was so bad - OBRY trains are typically slow moving and the damage seems disproportionate.

TOareaFan said:
kinda weird (in a twilight zone kinda way) that you would create this thread today:

I (unfortunately) thought of it after seeing that article. Thought someone might be able to explain why damage was so bad with a slow moving train.
T

alexanderglista said:
I (unfortunately) thought of it after seeing that article. Thought someone might be able to explain why damage was so bad with a slow moving train.
Click to expand...

fast moving street? with very few trains? I have driven that stretch of road maybe a 1000 times....never seen a train....so I am going to guess a careless, speeding driver not expecting a train to be there....but let's wait to find out for sure.
S

The trains are allowed to do 30mph - that's not an inconsequential speed.

I've had crews tell me that one of the more common types of accidents on the line is a car hitting the train broadside. I suspect that's what happened here.

smallspy said:
The trains are allowed to do 30mph - that's not an inconsequential speed.

I've had crews tell me that one of the more common types of accidents on the line is a car hitting the train broadside. I suspect that's what happened here.

It does not appear to be the case here....it was a very short train and the car was

pushed between 50 and 100 metres from the crossing south along the tracks
Click to expand...

Whatever happened, it seems the car got on the tracks and was hit by the front of the train (not assigning blame there just pointing out that not the car hitting side of train).

The CP Rail line through Bolton currently carries high volumes of freight, and most of it is single-track. Accordingly, the most that could be hoped for initially would be one or two trains morning and evening until such time as the CP line is double-tracked between Bolton and Weston.

No such problem exists for the former CP line between Orangeville and Brampton, which currently has only a few freight trains and perhaps one or two Credit Valley Explorer tour trains a week.

However, the trains currently are held to a maximum speed of 30 miles an hour, and upgrades of the rails and roadbeds would be needed to permit the speeds found on the line of up to 70 m.p.h. when CP Dayliners ran between Owen Sound and Toronto in just three hours.

Were an Orangeville/Caledon delegation to approach Metrolinx, they might also inquire as to the agency’s long-term equipment plans.

For reasons we’ve never seen explained, all GO Transit trains are the double-decker variety, with each of up to 12 coaches being capable of carrying about 200 passengers.

This clearly is needed during rush hours, but far more than what is required for off-peak hours or for new services to places like Orangeville, Alliston and Peterborough, not to mention for the Smart Track service Toronto Mayor John Tory is proposing for the Toronto-area GO lines.

As we see it, an ideal conveyance for low-demand periods on GO lines would be a self-powered, natural gas/electric hybrid similar to Toronto’s new low-slung streetcars or perhaps the type of vehicles now being used for the UP Express service between Union Station and Pearson Airport.
Click to expand...

I've always envisioned a fleet of small GO DMU's operating on new lines to Bolton, Cambridge, Peterborough, and Orangeville. However I've been told that buses at that ridership make more sense.

Buses on Highway 10 and on Hurontario/Main to Downtown Brampton will always be faster than train service on the OBRY corridor. And since there are only a six buses a day - weekdays only - on Route 37, I don't see the need. The tourist train is great - probably the most scenic train ride in Southern Ontario, too bad you have to get up to Orangeville to use it.
S

TOareaFan said:
It does not appear to be the case here....it was a very short train and the car was

Whatever happened, it seems the car got on the tracks and was hit by the front of the train (not assigning blame there just pointing out that not the car hitting side of train).

There are all sorts of appliances on the sides of railway equipment that can snag things like cars and drag them along. It doesn't need to be the front of the loco doing the damage.

In any case, I haven't had a chance to talk with any of my contacts up there, so I haven't heard their side of the story as yet.

smallspy said:
There are all sorts of appliances on the sides of railway equipment that can snag things like cars and drag them along. It doesn't need to be the front of the loco doing the damage.
Click to expand...

Yeah, thought of that but the story did say the car was pushed not dragged/pulled....of course this could just be laymen (or lazy) language but that is what it says.

Since there is now a thread on this I might as well contribute. The diamond between OBRY and the CN Halton sub was upgraded in the last few years to allow the OBRY trains (which run at much slower speeds) to be "lifted" over the CN tracks by the the flanges of the wheels of the OBRY engine and cars it pulls. Here's a video of it. This reduces the banging sound when trains go over the diamond in both directions and it reduces wear and tear on the diamond. BCRY also uses this type of diamond.

Over the years I've seen people post here that one option to reduce costs would be to abandon the OBRY track south of the CN Halton sub and interchange with CN rail. There used to be a connection track at the diamond before it was removed. Of course, this might not save any money because transferring cars via CN could take more time.

I want to take this moment to share some information about this line that people may not know.

I've taken an interest in the OBRY because, up until the late 1990's the line ran to Owen Sound under CP Rail. Even to this day, the line is called the Owen Sound Subdivision, despite terminating just north of Orangeville. Between Dundalk and Flesherton (towns in Grey County, that the former line served) was Saugeen Junction, where a branchline ran off the Owen Sound Sub to Walkerton, Ontario, called the Walkerton Subdivision. The line was pulled up in 1985. My Grandmother to this day owns a farm that the Walkerton Sub ran through. In 2002, we bought back our portion of the line from CP Rail (12 acres for $2500 + legal fees). My love of trains came from exploring the abandoned right of way as a child. Anyways, here are a few interesting pieces of information about the Owen Sound Subdivision line.
Anyways, if I think of anything more, I will post it. I just wanted to share some of the past, present, and future of this very exciting shortline.
C

When the reopening of the Owen Sound portion as a shortline was explored, there was good reason to believe that new business, particularly agricultural, might be achievable. The limiting factor however was the condition of bridges on the line, which would have consumed a lot of work, ie money. There have been periodic rumours of relaying to Shelburne to serve an emerging customer there. Without a large customer however, Orangeville is as far as we will ever see it serve.

CP has been looking to OBRY to do more of the industrial switching around Streetsville. This being the case, it's less likely that the south end will be pulled up. Railroads just don't give away interchange rights. CP will stubbornly hold onto the interchange rights even if it looks on the traffic as an annoyance. A CN interchange (which would be quite effective) just won't happen.

If the Brampton CN third track goes in, doesn't the option to curve the OBRY onto it and sever the southern portion become more attractive given the need to replace the diamond with an even more expensive one in both money and operational compromises? They could look at a grade separation I guess to retain the CP routing but that would be challenging to put it mildly.
You must log in or register to post here.
Share:
Facebook Twitter Reddit Pinterest Tumblr WhatsApp Email Share Link